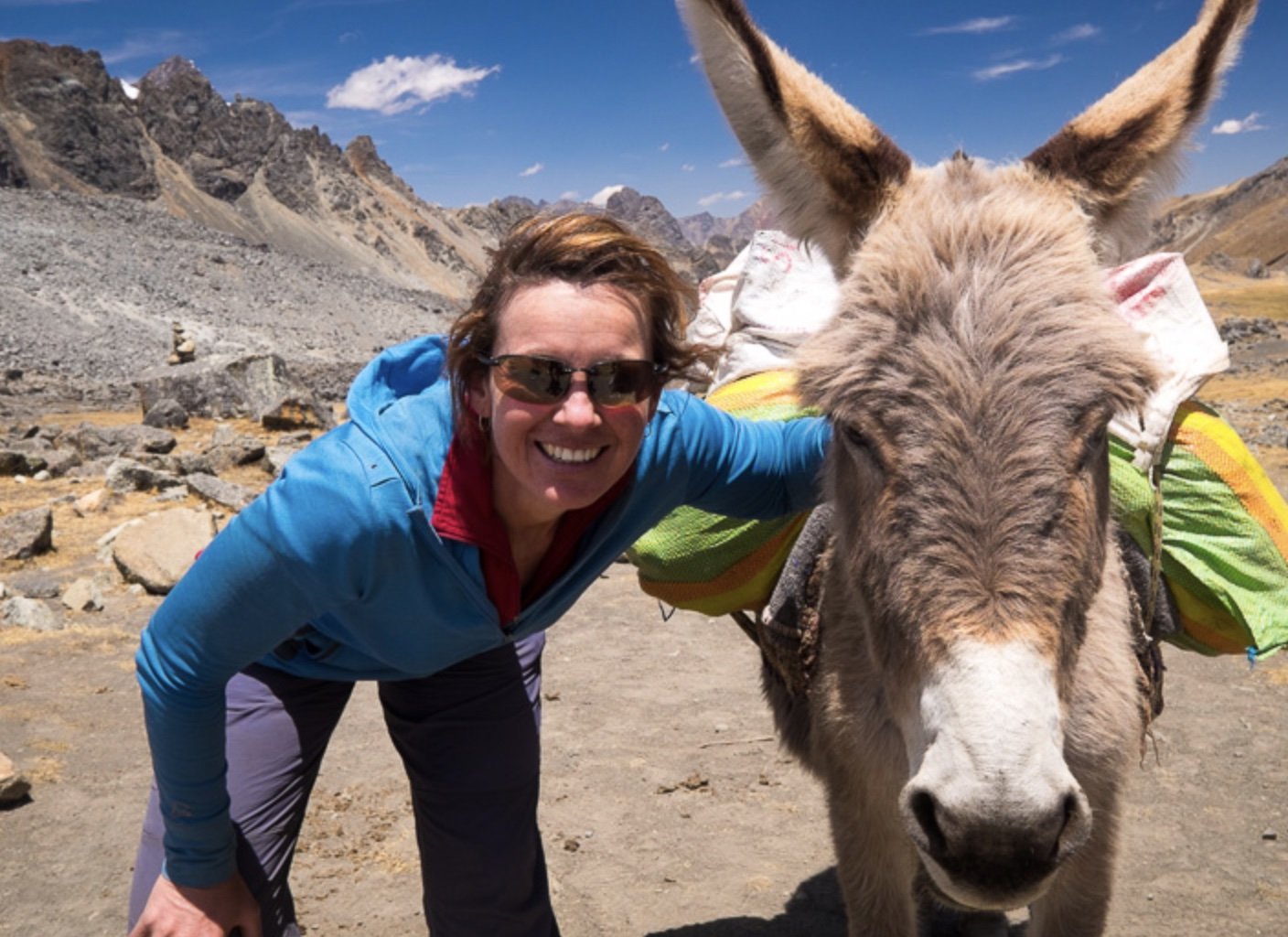 A professional photographer and writer who loves to explore remote and unusual places. Currently living in Greenland.

Here are twenty-five of our favourite South Georgia facts to entice you into planning a visit. South Georgia Island is often included in Antarctic itineraries and is one of the best places in the world for seeing vast numbers of wildlife. You can find out more about visiting South Georgia on one of our small group expeditions here.

1. South Georgia is not part of Antarctica

South Georgia and the South Sandwich Islands are a chain of sub-Antarctic islands in the Southern Ocean. They are located more than 2,000km from the continent of Antarctica but the reason many people associate the two is that many cruises to Antarctica also stop by South Georgia.

2. It’s quite a large island

South Georgia is 170 km long and ranges from 2 to 40km wide. It is ruggedly beautiful with two mountain ranges (the Allardyce and Salvesen) and many glaciers. Gorgeous backdrops for wildlife photos.

3. It is home to the tallest mountain in the UK

The highest mountain in the mainland UK is Ben Nevis (1,345m). However, Mt Paget on South Georgia stands more than twice as tall at 2,934m.

Given its southerly location and tall peaks, about 75% of South Georgia is permanently covered by ice and snow – even during summer. Like Greenland, it is mostly along the coastline that you find scant and hardy vegetation. 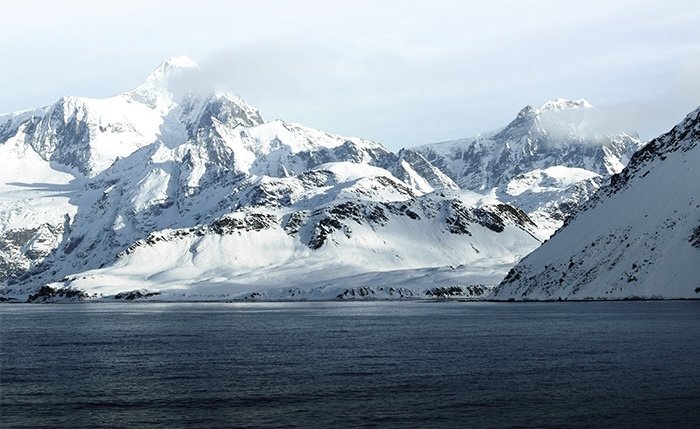 5. South Georgia does have a small settlement

Grytviken at King Edward Cove is the only settlement on South Georgia. Occasionally Government officials responsible for the administration of the island are based there, though they generally spend most of their time in the Falklands.

6. You can visit the South Georgia museum

Grytviken is also the location for South Georgia’s museum. Focused mostly on whaling and Antarctic exploration, the director generally lives there for 6 months of the year. Other staff occasionally work on the island but mostly work remotely. 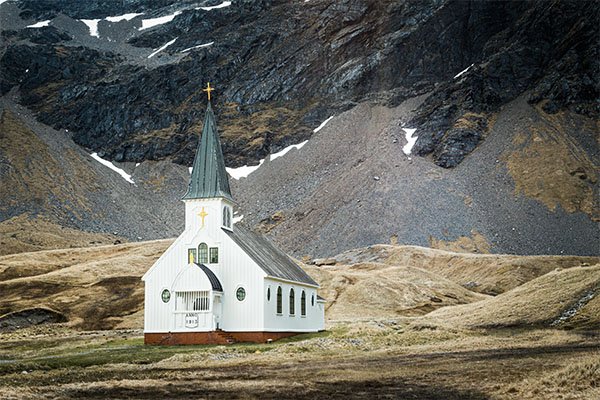 7. You can only arrive by sea

One of the most important South Georgia facts is that there is no way to fly to South Georgia. The closest airport is on the Falkland Islands, about 1,500km away. In order to visit the island, you must arrive by private boat or on an organised Antarctic expedition cruise.

8 .There is nowhere to stay on South Georgia

An interesting South Georgia fact is that there are no hotels or accommodation. When you visit, you sleep on the ship you arrive in and must do day-trips to the island from that base.

9. There is no resident human population

Like Antarctica, nobody lives permanently on South Georgia. Scientists, Government officials, Museum staff and tourists all come and go, and while the island has a summer population of around 40, its winter population is closer to 8 people.

10. You can get married on South Georgia

Talk about an exotic location to tie the knot! Marriage laws are similar to those of mainland UK and couples of any pairing, including same-sex couples, can apply to be wed there. Only civil services are available as there are no ministers of religion on the island.

11. South Georgia has its own stamps

The first post office on South Georgia opened in 1909 but it wasn’t until 1962 that South Georgia was recognised with its own stamps. Prior to then, Falkland Island stamps were used and overprinted with “Dependency of South Georgia”. 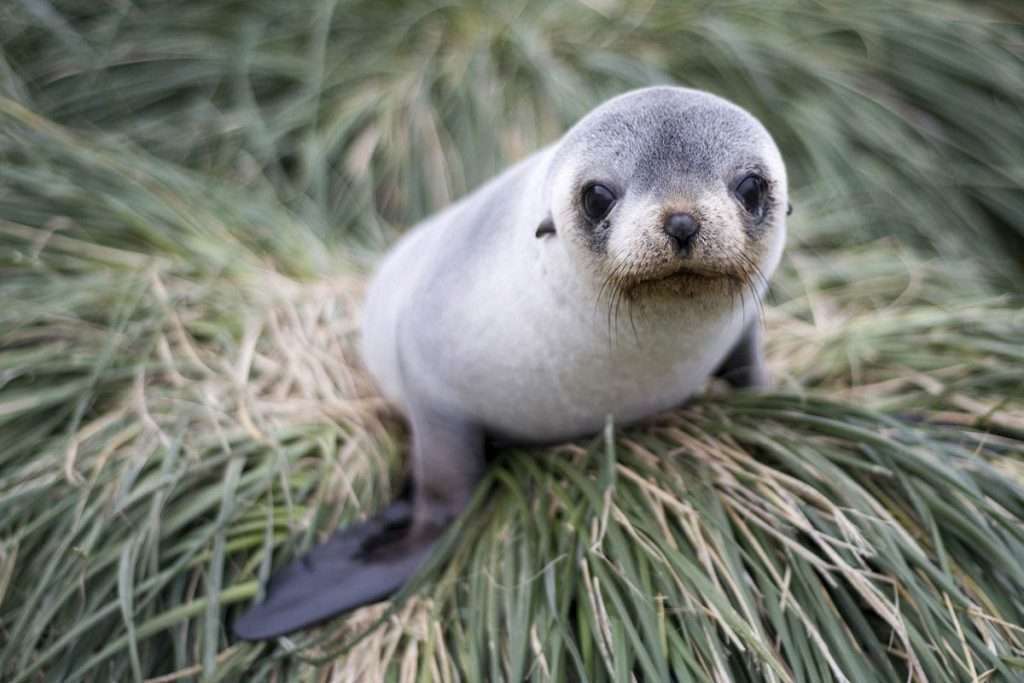 13. Captain James Cook was the first explorer to land on the island

You have to hand it to Cook. He really did go everywhere! Although South Georgia was first sighted in 1675 by a London merchant with the name Antoine de la Roché, it was Cook who first landed on the island and claimed it for the UK. On January 17th, 1775 he named it the Isle of Georgia in honour of King George the third. This date is now known as “Possession Day”.

14. South Georgia used to be an important site for whaling

In the 19th and 20th centuries, the island was the hub for whaling in the Southern Ocean. Tens of thousands of whales were slaughtered and processed for their oil, and uncounted numbers of seals and penguins were killed for their fur and meat. The settlement of Grytviken is primarily made up of buildings repurposed from the largest of South Georgia’s whaling stations that operated between 1904 and 1964.

15. South Georgia is the site of the southernmost battle ever fought

One of our lesser known South Georgia facts is that on the 3rd April 1982, the day after the invasion of the Falkland Islands, the east coast of South Georgia was seized by Argentine Navy forces. Battle was joined with UK forces several times over the next month, permanently disabling the Argentine submarine Santa Fe and with the loss of several lives and helicopters.

South Georgia Island played a critical role in the rescue of the crew of Shackleton’s doomed 3rd Antarctic Expedition. It was from Grytviken that his ship, the Endurance, set out, and it was at Grytviken that Shackleton and 2 other men were able to raise the alarm about the plight of the crew – 7 months after they abandoned the Endurance to the crushing sea ice. All crew members were ultimately saved after an ordeal that lasted for more than 20 months in what is one of the world’s most incredible stories of survival. On his next expedition to Antarctica, Shackleton suffered a sudden heart attack while moored at South Georgia and the island became his final resting place. His grave is at Grytviken. 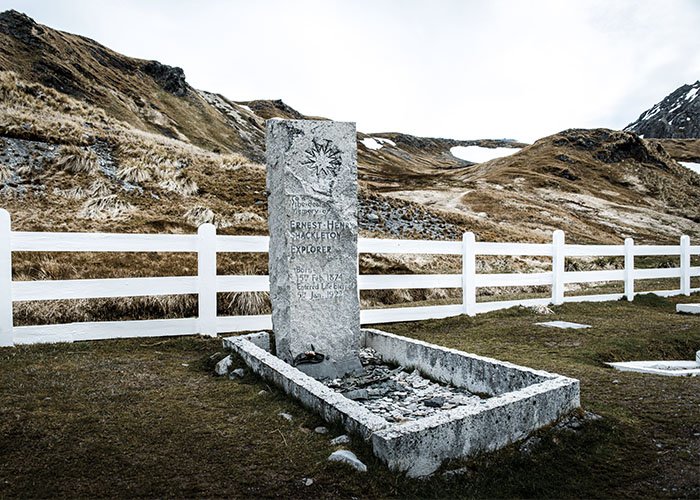 Grytviken cemetery contains 64 graves, mainly of whalers who died while working at the nearby whaling station but most famously of the explorer Ernest Shackleton who died on board his ship Quest on the 5th of January 1922 at South Georgia.

17. South Georgia is one of the most biodiverse places on the planet

Often referred to as “The Galapagos of the South” or “The Galapagos of the Poles”, the reason everyone comes to visit South Georgia is to see the incredible wildlife. The island is estimated to have around 1,500 different animal species, not all of which are as cute as penguins or as majestic as the Blue whales that frequent its waters. The vast numbers of animals are due to the island’s location close to the Antarctic Convergence – a natural boundary where the warmer waters of the Atlantic Ocean meet the colder waters of the Southern Ocean. The resulting nutrient-rich waters are ideal for Antarctic krill, which in turn attract fish, whales, seals and penguins.

After being decimated in the 19th and 20th centuries, it is estimated that whale populations have almost recovered to their pre-whaling numbers. From an estimated 500 Humpback whales at the end of the whaling era to around 25,000 in modern times, this equates to around a 90% recovery for the species. Humpbacks, Fin, Minke, Southern Right, Blue whales, and Orcas are all spotted in the waters of South Georgia now.

19. South Georgia is one of the world’s most important penguin breeding areas

If you want to see penguins, this is the place to come! It is estimated that there are more than 3 million pairs of Macaroni penguin, 500,000 pairs of King penguin, 100,000 pairs of Gentoo penguin, and 6,000 pairs of Chinstrap penguin that breed on the island. Adélie and Rockhopper penguins are also found here, but nowhere near as many. 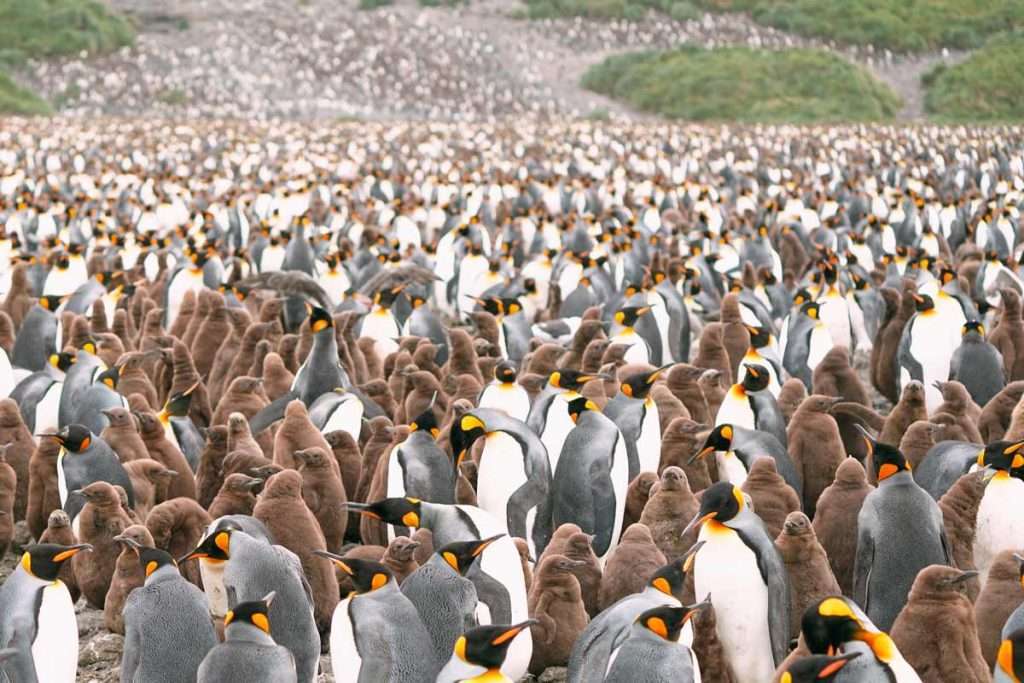 Thousands of king penguins herd their young (in brown) into creches to keep them warm.

20. One of the best places to see King penguins

King penguins look and at quite similar to the regal Emperor penguins that are featured in any nature documentary about Antarctica. But while Emperor penguins are only found in remote and scattered places on the Antarctic continent, you can’t miss the King penguins if you visit South Georgia. 150,000 breeding pairs return to St Andrew’s Bay every year to raise their chicks, and it is estimated there are more than half a million breeding pairs on the entire island. Be warned, it is generally quite noisy and smelly when you visit their colonies! 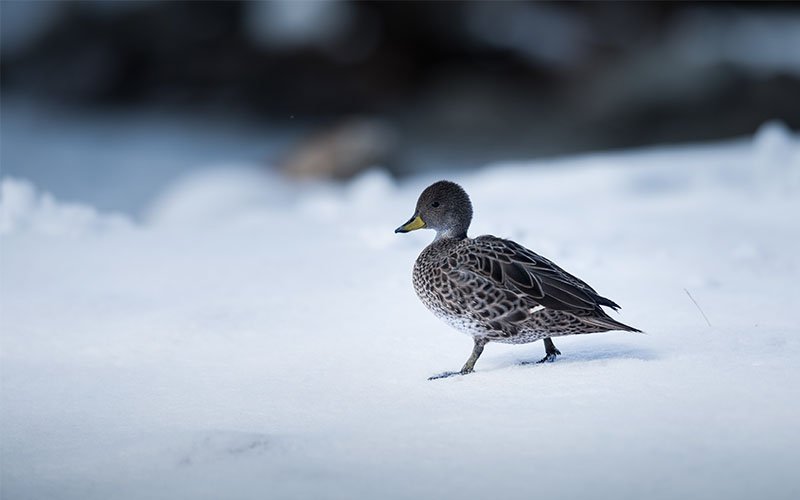 Introduced by whalers in the 19th and 20th centuries, rats and reindeer were a major problem on South Georgia until recently. The more than 6,000 reindeer have been eliminated and there is now essentially no sign of rats after an extensive eradication program that began in 2012. Find out more at South Georgia Heritage Trust.

To ensure the island remains free of non-native species, all visitors to South Georgia must now follow rigorous biosecurity measures before coming ashore. Learning how to wash boots, backpacks and outer gear is all part of the adventure and ensures that seeds and dirt from elsewhere are not introduced into this protected environment.

24. The same tourism rules apply to South Georgia as apply in Antarctica

The government of South Georgia works very closely with the International Association of Antarctica Tour Operators (IAATO) to ensure that tourism remains sustainable and does not impact the fragile environment of the island. Strict biosecurity measures, waste management, and rules about approaching wildlife are all enforced, and evidence to date indicates there has not been any negative environmental effects from tourism.

Similar to what happens in Antarctica, landings are restricted to designated sites and visits are tightly scheduled and controlled. In particular, a maximum of 100 guests are allowed at any particular landing site at any one time and visits are limited to only a few hours. These landing sites are closely monitored for environmental impact and managed according to the findings.

We hope you enjoyed our South Georgia facts. 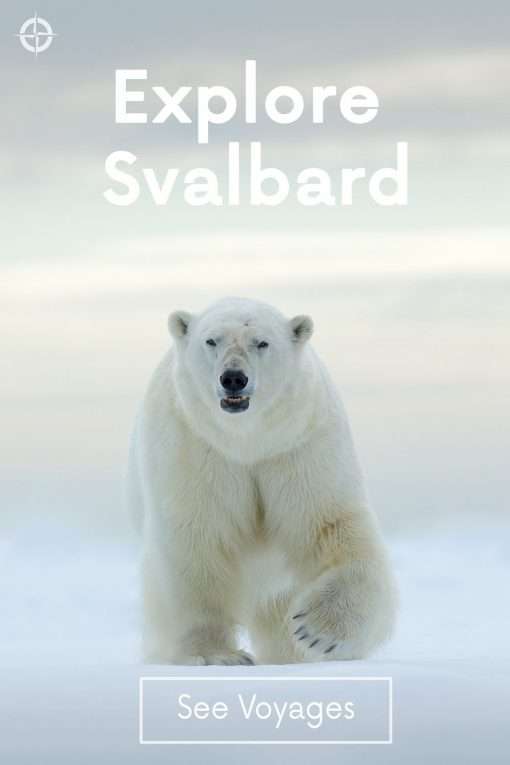 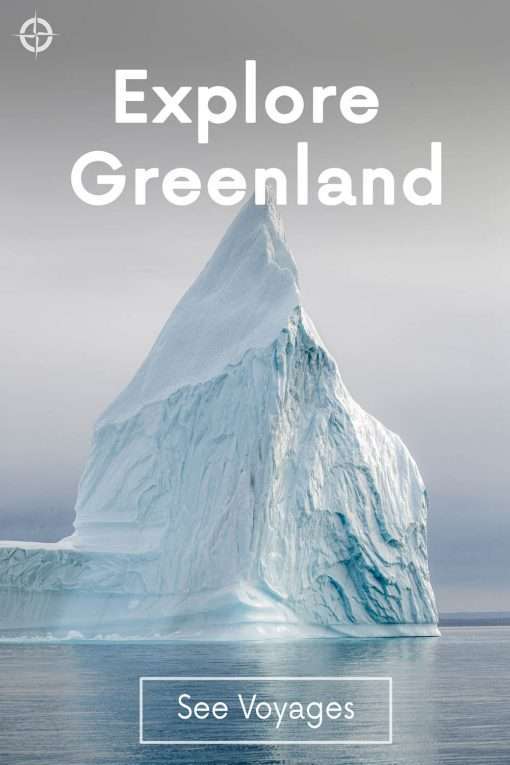